A friend who has lots of experience installing clutches stopped over and in a hour we had the new clutch installed and transmission mounted on the engine. 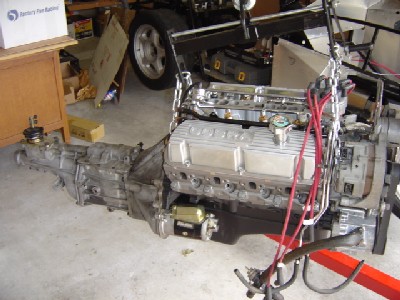 Installing the new clutch was not very hard. However, I say that because the engine was out.  I don’t think I would say that if I had to do the job on my back lying under the car. I hope this clutch lasts my lifetime.  Oh, I did have the flywheel re-ground as long as it was out.

The engine is ready to lower into place. See that black engine leveling gizmo?  It is worth the 20 bucks it cost me because with that it was possible to tilt the engine to get it into place. 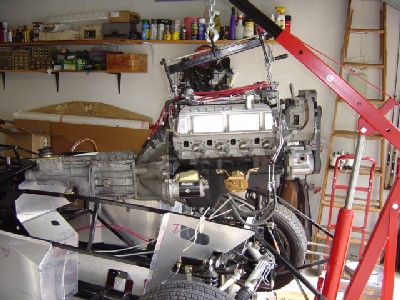 I don’t know how one would do the job without that device. Of cource I have a tool I may never use again!  Wait a minute, I am going to want to build a FFR Spyder next.  I guess I will store this tool for later use.

Ta -dah  the engine is in the car and mounted into place.  Of course I am missing a few parts before it is ready to fire it up. I am now finding that I am able to reclaim some of my two car garage space. 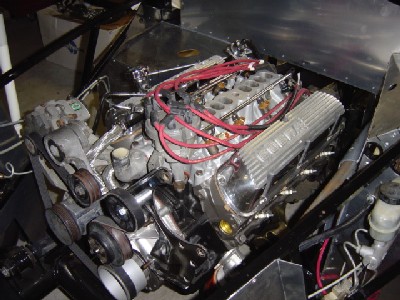 I picked up the shorten drive shaft today (not seen in the picture). It cost me a bit more then FFR suggested but that was because they suggested I replace the u-joints which were worn.

Hours spent on the build: 63 hours

I decided since I live in Texas where a “cool” evening is when the temperature drops below 80 that I was not going to install a heater.  So I had to  do something with those pesky hot water pipes. 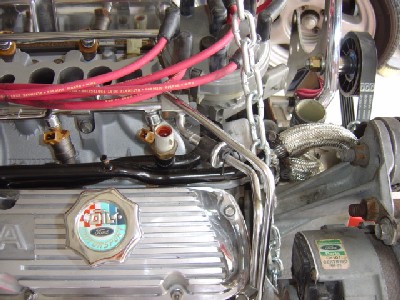 Earlier I had cleaned them up and painted them a shiny black. Ahh, but now that I know what they are for and that I was not going to use a heater I decided to remove it and reroute the hot water that would have gone to the heater coils.

Here is how I cut the pipe.  Gosh, I hope this works. 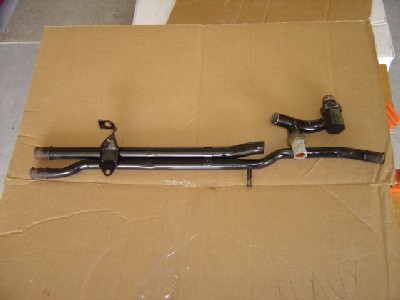 After I cut the pipe I wanted to put a bead on the cut pipe to help hold the hose on but my local machine shop did not have the tool to do that. I happened to get flyer in the mail with  a tool for  beading pipes for only 300 dollars.  Out of my price range.

Instead I heated the pipe red hot with my trusty propane torch and whacked a socket wrench down the pipe to flare the end.  It worked!!  Well at least I think it worked.

Here is how it looked when I put it back on the engine. 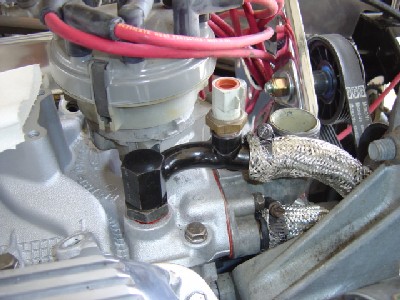 I’ll let you know if it leaks later. In which case I may decide the car needs a heater after all.

Hours spent on the build: 66 hours

I wanted to install my EFI throttle body but it turns out those new Cobra value covers sit a little higher and so I need to find a spacer to raise the  throttle body up a half inch.  Found one at summitracing.com for about 50 bucks. 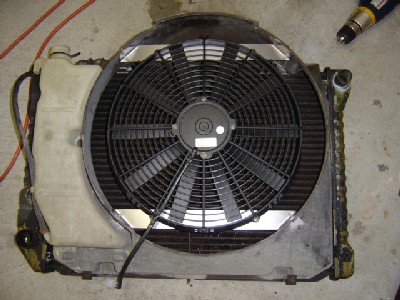 I moved on to the radiator installation. The fan assembly mounted right into the shroud easily.

It fit into place on the frame just like the manual says but you do have to shift it over to the left to be sure there is room for the upper radiator hose. 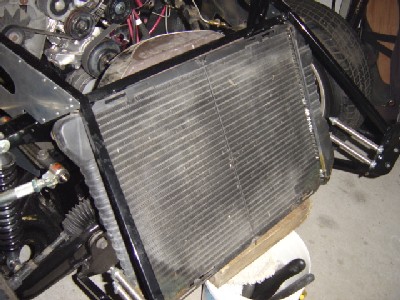 I am using a bucket to hold the bottom until  I can put some tie wraps on it.

I also decided on another upgrade. A new radiator cap.  It set me back 6 bucks.  I just blew my build budget!

I decided to replace the upper radiator hose and saw pictures on the forum how others installed the  radiator filler option. The belt is off because I am cutting that big A/C bracket down to size. 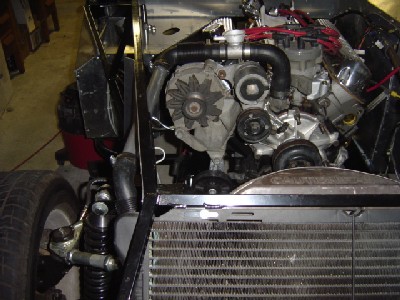 I was thinking  that maybe I should include time I spend on this web site in my build time.  Total hours so far:  453 hours.  It is pretty bad if one spends more time on a website then on the Roadster.   🙂

Hours spent on the build: 68 hours

While waiting for my headers and side pipes to arrive (yes they are back ordered and I had to call FFR multiple times so far)  I thought I would move on to install the rear wiring harness that came out of the donor. 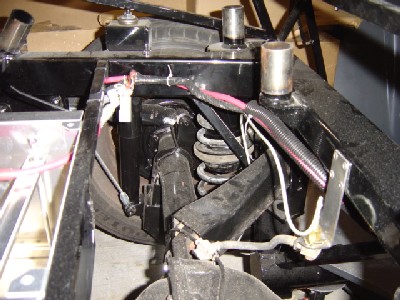 I used tie wraps to hold everything in place for starters.  The red cable is my positive battery cable.

Gosh, I have to finish this soon, I see dust forming on the frame!

The cables inside the tubing supplied in the kit are run through the transmission tunnel.  I think that is what it is called. 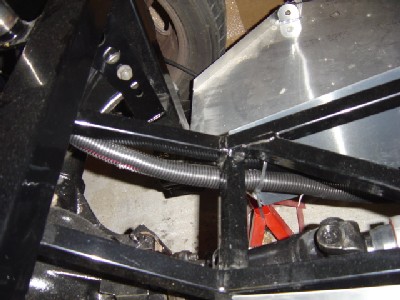 Sounds better then a do-hickey.

Then I ran the cables along side the 3/4 inch member into the engine compartment. 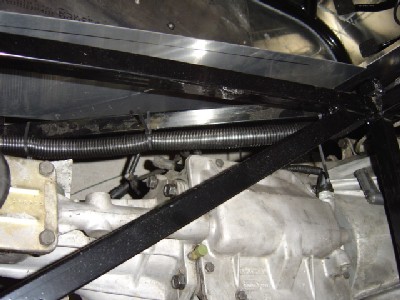 I am not sure this is the best picture but I am sure you get the idea.

Hours spent on the build: 69 hours

Once in the engine compartment I needed to pass all this wiring through a 3/4 inch hole in the upper driver footbox.  Yeah, right. 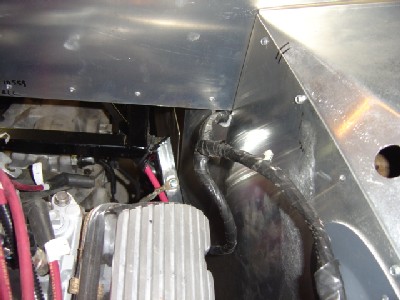 I guess this is where folks start removing wires. I was too nervous to do that at this point.  I passed only the wires that had connectors I labeled for under the dash.  In the picture you can see where I only passed part of the wiring into the footbox. The cable that comes forward in the picture was for passenger side door and seat belt so I think I will be able to cut that out.  I’ll wait until I start the engine before I cut any wires.

This is where I do my John Madden imitation. Just like John, who shows us who messed up on a football play, I am using that magic pen to try and show where my rear harness wiring is coming into the footbox. 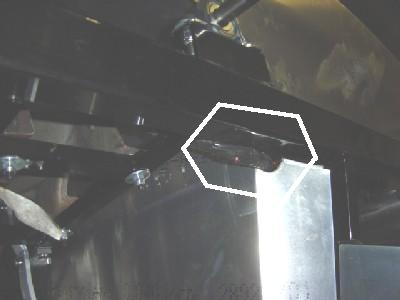 I actually trimmed a little of the sheet metal away in order to get that cable in place.  All edges are protected with that plastic edging that was in the kit.

The transmission wiring harness was much easier to install.  It popped right into place and then I used a combination of tie wraps and hot glue to route the wiring up to the front of the foot box., up behind the gas pedal and behind the dash. 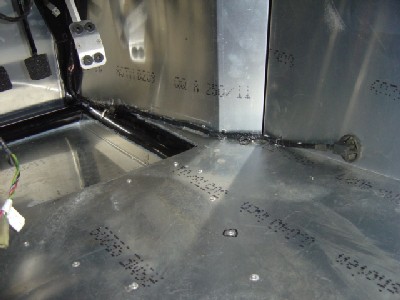 Hours spent on the build: 71 hours