Here is how I mounted my directional and ignition switch.  Once the dash is in place I will cut the directional lever shorter. 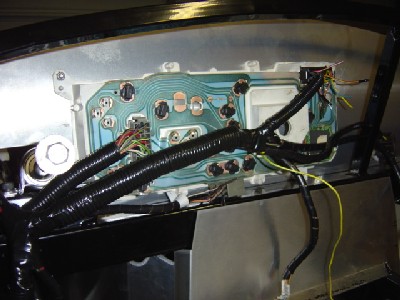 Maybe even replace these with better switches but for now this will do.

Here is how I mounted my directional and ignition switch.  Once the dash is in place I will cut the directional lever shorter. 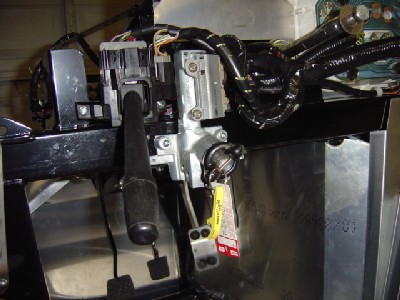 Maybe even replace these with better switches but for now this will do.

The last of my back ordered parts arrived (except for the Mustang gauge conversion kit) so I was able to mount the catalytic converters and side pipes. 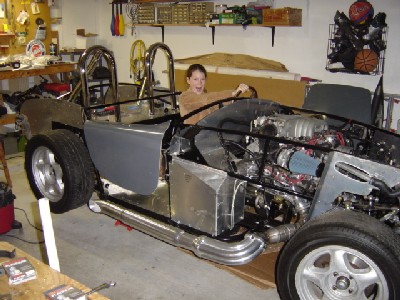 Since Factory Five shipped me the 4 port side exhaust I also needed a different mounting bracket. Jessie was a big help getting those shipped out to me along with the newer gaskets and additional nuts and bolts.

Hours spent on the build: 106 hours

I installed the first half of the trunk just like the instructions stated.  Not hard at all. 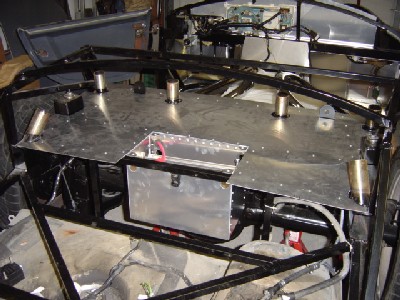 This trunk is not going to be very big. I guess I won’t use this car to haul lumber or Quikcrete.

Before I installed the next piece I cleaned up the tail light wiring while it was still easy to see.

Next I installed the second half of the trunk panel as well as those side panels around the wheel well.  That is the fuel cut off switch in the lower left corner. 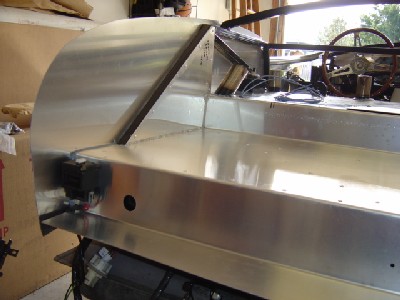 Although it does not show up well I also ran a pair of blue wires up through the upper panel for the license plate light.  If you look closely you can see the coil of wire up near the roll bar stub.

I also did a lot of little clean up work. Refilled transmission with oil, installed the battery negative ground, caulked around gaps, installed oil sender unit (which was tricky because of space. If you want to see a picture let me know.

With the electrical work done it was time to hook up the battery.  What is that?  Hey the brake lights work. The directional lights work also (once I realized I had to jumper the hazard light switch because it is not installed). 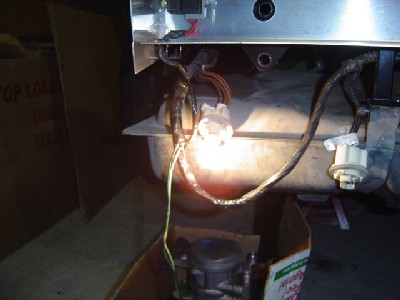 So far so good with my wiring diet work. I am not ready to try and start the car but thought I would see if it would at least crank.  It didn’t. Shucks  oh wait, you have to push in on the clutch AND you have to make the connections under the car to the transmission.

I am going to save that for tomorrow….

Hours spent on the build: 121 hours

My first  attempt to start did not go far. The engine would not turn over just “click”.  So it was time to put the battery on the charger.

In the mean time I worked on wiring up a DPDT switch for the headlights and  I bought a 3PDT relay to use for the flashers.  I had to do this because I did not keep those switches from my donor. 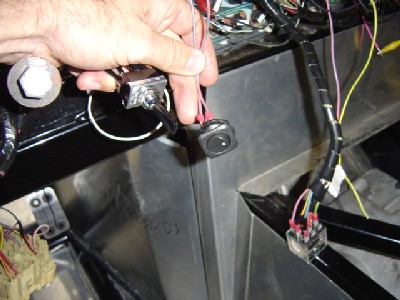 Besides I think I will like the look of these switches instead of having the old Mustang donor switch under the dash board.

That little rocker switch activates the relay for the flashers.

I was still waiting for the battery to charge so I added the hand brake per the manual. 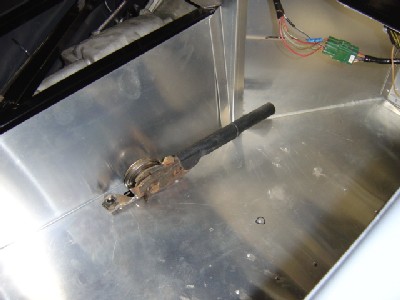 I found some better locations for the hand brake on the forum so I don’t think it will stay here but for now this is where it is.

I had to go to the junk yard to get the fuel vapor canister.  It was one of those things I did not take out of the donor. 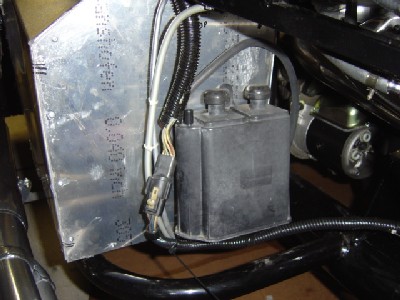 Opps. I think I will be moving this canister up to the firewall away from the hot pipes.

Battery was charged but the engine still will not crank! I took out the starter and found out the starter won’t spin but there was a great show of sparks when I hooked it up directly to the battery.

You probably don’t believe me when I say these parts came from a running donor!

Hours spent on the build: 125 hours

Once the new starter was installed I decided it was time to put the battery in the battery box.  Up to now it was on the garage floor and I was using jumper cables. 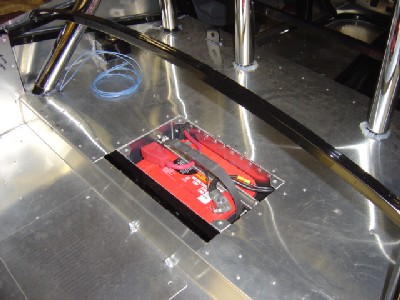 Well the battery did not fit because of the small lip on the battery.   I knew sooner or later I was going to need a new battery so now was as good a time as any. Finally the engine would crank.  yahoo… but would not start.

I did notice that my fuel pump would run continuously.  That was not right. So I started tracing wires.  I pulled the EEC wiring harness out and did more tracing. 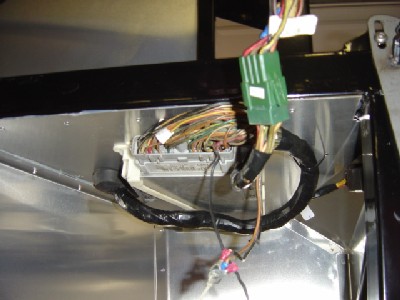 10 hours of wiring tracing to finally realize my 1989 donor had a 1992 wiring harness.  No joke. The prior owner had a home brew wiring job that kept the fuel pump running continuously. This is a view of the EEC computer and part of the EEC wiring harness.

Yes I did say this donor was a running car when I bought it.

I tired to find a 1989 wiring harness but did not have any luck so I decided to re-wire the 1992 harness to look like a 1989 harness. Not a task for anyone without lots of patience. 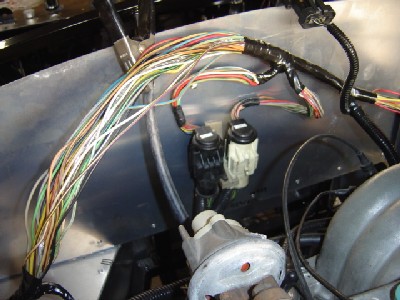 You see the colors of the wires did not match my wiring diagrams so it was a slow process to trace all 60 connections on the EEC.  It took 14 hours to do this but when I was done I was confident I would be able to start the car.  ha!

But it did not… now the fuel pump would not run at all.  I could not get any computer diagnostic codes (KOEO codes) out of the computer either.

More tracing of wiring and checking computer connections. I got lots of help from the forum for things to check for.

Hours spent on the build: 151 hours

As long as I was checking wires I decided to rewrap the fuel injector wiring harness and used a 1/2 to 3/8 brass pipe fitting to put the coolent temp sensor into the manifold.  This looks better then my earlier solution.
After following up on all the suggestions from the guys on the forum I concluded the computer must be bad. So I bought a new computer. 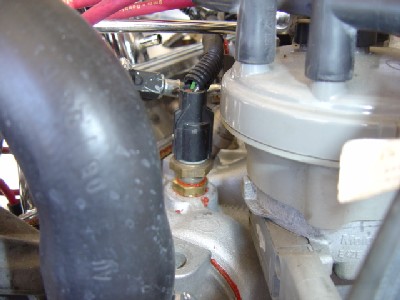 Wa-la! With the new computer the fuel pump runs and shuts down after about 2 seconds like it should. Plus I am getting KOEO codes now.  The computer was bad!

Did I mention the donor was a running donor? I figure the prior owner must have modified the wiring instead of buying a new computer.

The KOEO codes told me I had to adjust the Throttle Position Sensor and I had to put a resistor in the “EGR Vacuum Regulator Solenoid” connector  (because it did not go to a solenoid).  Using a 33k ohm resistor was enough to make the computer think the solenoid was there. 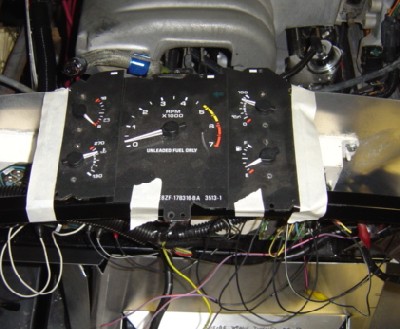 The engine now sputters but will not run. Oh it is getting so close. So I  temporarily installed the Mustang gauges so I could see if I was getting oil pressure. I bought a fuel pressure tester (could not find one to borrow) and found the pressure in the supply line was a nice 40 pounds. Right within range.

I felt the headers and some exhaust ports were hot (they were firing) and some were stone cold (not firing). I pulled a spark plug and it smelled like gas. 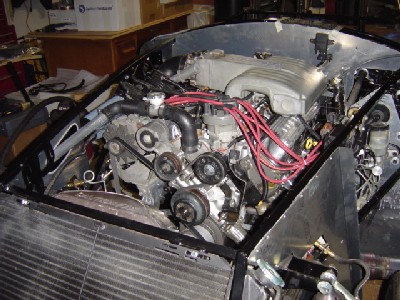 They were new plugs and at the auto parts store they said to gap them at .054. I checked the shop manual and it said to gap the spark plugs at .050.  So I regapped the plugs and guess what.

It does not idle smooth yet but it is running on all 8 cylinders. It sounds awesome!.

Hours spent on the build: 157 hours