I added the trunk latch, license plate holder and light to the trunk. 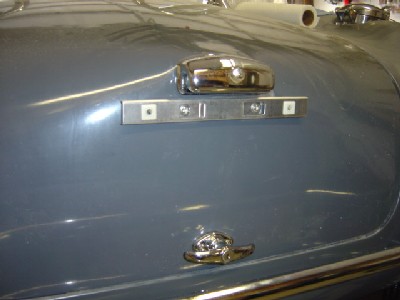 This was pretty easy with the template provided.  I don’t have it wired up inside yet but don’t expect any problem there.

Post build note: In 2013 while driving on 130 with Doug we lost the license plate. Bracket and all came off and we did not realize it until we pulled in at home. Hummm, could it be we were doing over 90 on Interstate 130?? The new bracket is much sturdier.

Okay the rear bumper got installed but I had to drop the gas tank AGAIN!.  Note to myself: Next time remember to use the longer bolts needed for this bumper installation.  Last month I dropped the gas tank to install the chrome bumper hoop without looking at instructions. 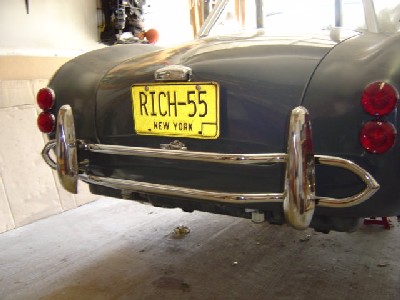 I learned that those nudge bars require longer bolts so I had to drop the gas tank again. Dropping the gas tank is not hard. I think I was more frustrated I did not know better. Who needs instructions?  No one if you like to do the same thing multiple times.  lol

Note: I used some extra washers for spacers on those nudge bars.

I put on the front bumper using the longer bolts that I took from the rear bumper. I also used a couple of extra washers on those nudge bars. 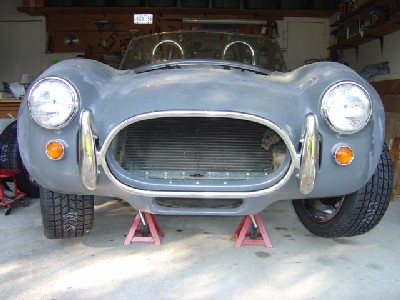 I also had to cut away some of the aluminum panels so I could get a wrench on those bolts.

Open wide…. looks like the car is going to eat you up.

Hours spent on the build: 227 hours