If I did not mention this already I decided to go with the Autometer gauge set. It looks like the conversion kits for the Mustang gauges will no longer be available. Besides, most folks on the forum like their Autometer gauges. 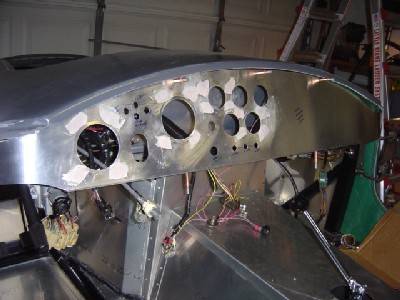 As you can see I applied some bondo to fill in some holes and then I bent ends until I was satisfied with the fit.

I decided to use three screws on top to hold the dash in place (see those cleco pins??) and two screws underneath (out of sight) using those aluminum pieces that come with the kit for mounting light and hazzard switches (which I moved to the dash).

As you can see I removed the donor gauge pod from the dash and replaced it with terminal blocks. You can also see how I cut the dash vinyl. Note how I left almost an inch and a half on top. I did this because of what I read on the forum. 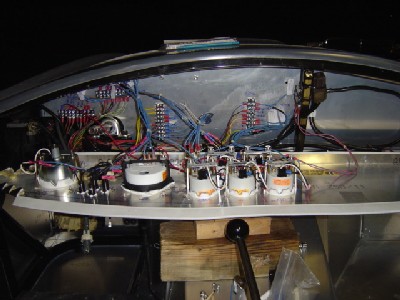 This piece tucks up in between the body and that 3/4 inch dash hoop nicely. It hides any gaps. Man those guys are smart!!

I found the 3M77 spray adhesive is good but after  a couple of days some of the vinyl along the curves started to lift up.  So I re-glued with Gorillia glue. That vinyl is there to stay now.  Arg arg arg

This is what the final dash looks like. I went with left and right blinkers with the blue high beam and lower check engine lights just above the steering. 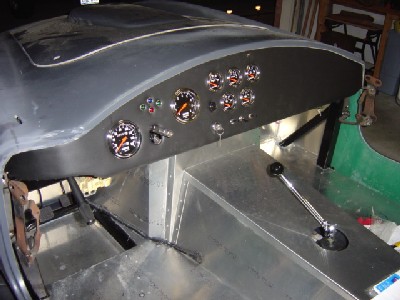 I removed the stock ignition and installed a dash ignition swith, moved the horn button up and have three toggle switchs. One for lights, next one for flashers and the last one for windshield wipers. Yeah, right, like I am going to really be driving in the rain with this puppy.

Next to the wiring diet I must say I spent a long time with the dash and the use of terminal blocks over the Mustang donor instrument pod. But I wanted it to look nice and was not going to rush.

I also had help from mom gluing the dash vinyl, thanks mom.

I thought I would toss in some extra pictures of the dash board since I spent so much time on it. 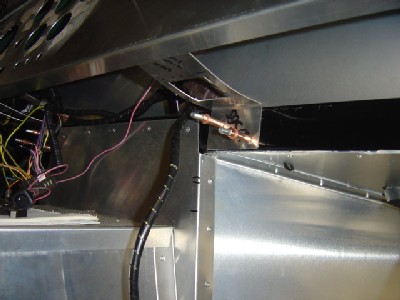 Here is how I used those switch brackets that came with the kit to support the dash on the bottom.

Of course it is not screwed in yet, but you get the idea.

Here you can see my vinyl cutting technique. 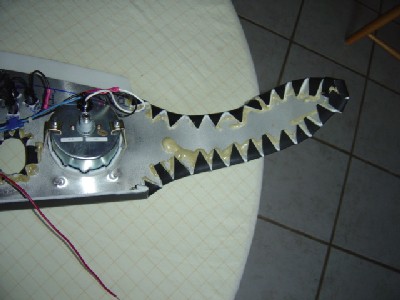 Oh that running stuff is none other then Gorilla glue. Be careful if you use that glue or you could become a permanant part of your car. It was tricky holding down those tabs while the glue set.  I used rubber bands and small blocks of wood to put some pressure on the vinyl and hold it in place without leaving marks on the other side.

One last picture of the wiring done for the Autometer instruments. 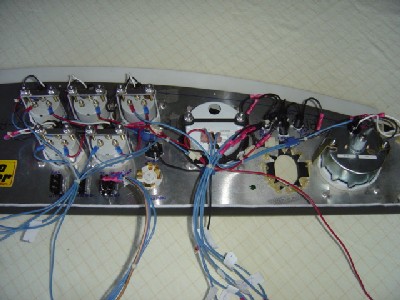 Not as neat as some of the pictures posted on the forum but it will be out of sight anyway.  Whew!

Hours spent on the build: 196 hours

Next I started working on fitting everything on the body. The idea was to completely assemble the Roadster and drive it around for a month before having it painted. 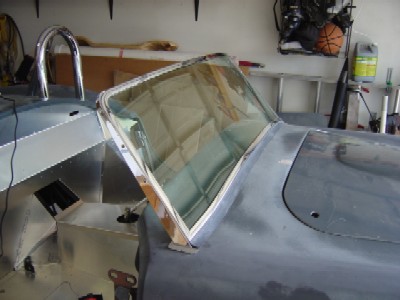 In go the “baby’s eyes”.  Or in other words, headlights.  The instruction manual was not real clear on how all the rim pieces went together until….. I realized I was using an older build manual. 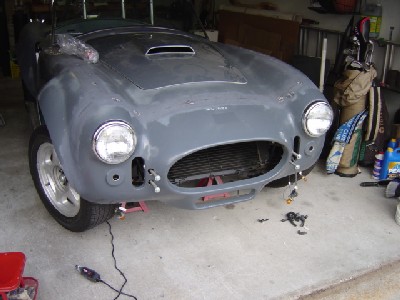 Once I figured out how all the pieces went together I felt kind of like, duh  of course.

I installed the front directionals and found that it is a good idea to check to see which wire runs the bright light and which wire runs the dim light. Each light assembly was different (in other words I could not go be the color of the wires). I also soldered all connections.
I also installed the rear tail lights. Then the light came on (no pun intended). What happens when I need to take the body off?  I am going to have to cut all the wiring I just did!! EEECK 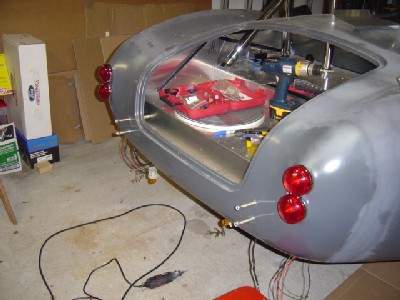 So off to Radio Shack to buy and install quick disconnect  connectors on all wiring so I can just unplug instead of cutting wiring. That solved that problem.

Hours spent on the build: 206 hours

I installed the LaMans gas cap. It was a little nerve racking because this was the first time I drilled new holes into the body. 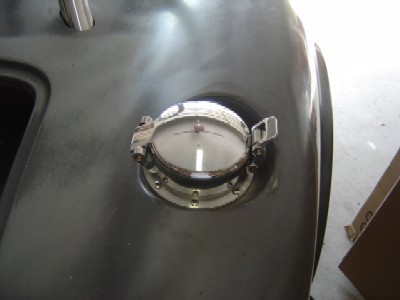 Cutting the filler pipe and connecting to the gas tank was just like the instructions said and was  easy.  However there was no mention of this little black wire in the kit.  Ohhh this must be a grounding wire so there are no sparks around the gas cap. Say that is a good idea. I wondered for a moment about the poor guy that realized that was necessary.  Then I went back to work.

I installed the front splash panels. This took a bit of trimming of the aluminum but nothing a little time and patience could not handle.

I decided to screw the panels in place for now instead of using rivets just in case I need to take them off when the body goes on.

Of course I never plan on driving in slop so these panels should always be this clean… yeah right!

The rear splash panel was much easier to install.  Very little trimming needed to get it to fit nicely into place. 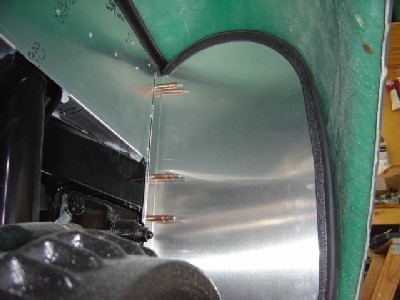 This shot shows my cleco pins holding the panel in place but they were replaced with screws for now just like I did in the front.

Hours spent on the build: 210 hours

March was a busy month for the car.
Here I installed the aluminum that helps hold the radiator in place.

I used stainless steel pan head bolts and washers in stead of rivets. 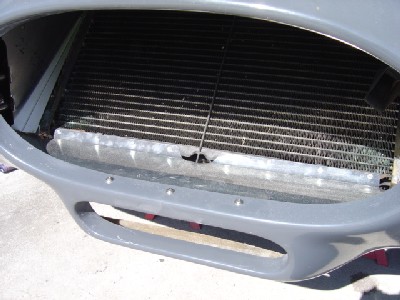 Again, I have to remember the body eventually has to come off to be painted.

Here is a view inside the nose on the drivers side.  I had to cut the aluminum around the bumper bolts. 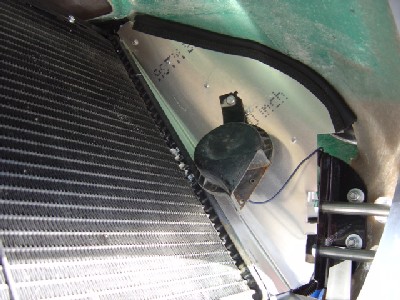 This is where I decided to mount the horn which is now working from the dash board button. Yahoo now I can toot my horn.

I had this odd looking piece of aluminum that I did not find referenced in the install manual. The forum came to the rescue and I figured out where it was supposed to go. 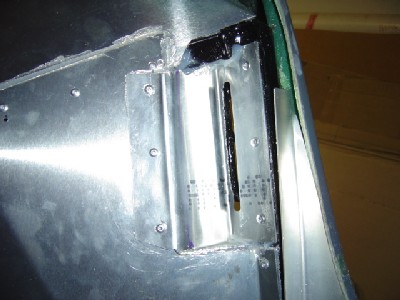 This is the drivers side and it took some bending and trimming to get it to fit but it covers up the hole around the door latch striker. I did the same on the passenger side.

Post build note: I got caught in a bad rain storm with the cobra and because there was a gap in this area it allowed water from the wheel well to shot like a hose inside the cockpit. I have since added aluminum to the wheel well to seal up this area.

Hours spent on the build: 213 hours

I decided to install the lower aluminum door panels but install it with screws instead of rivets so I can remove it later if needed. 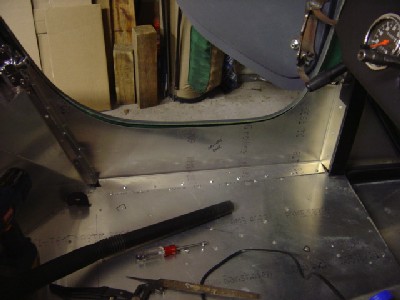 With this piece in place the body bolts are harder to get to. A suggestion from the forum was to use those clip nuts. Sounds like a great idea to me.

It took repetitive attempts to install the trunk, then sand it down some, then reinstall, then sand again, etc. 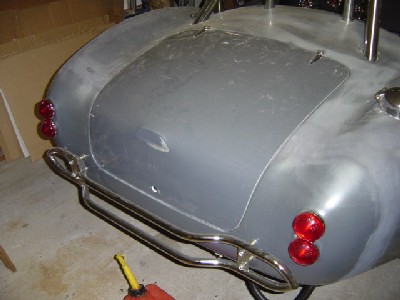 When the trunk is opened completely (90 degrees to the body) it touches the body. Obviously I don’t want that because it may mess up the paint so it took a lot of trail and error. I still need to do a little more sanding and round the edges of the trunk. 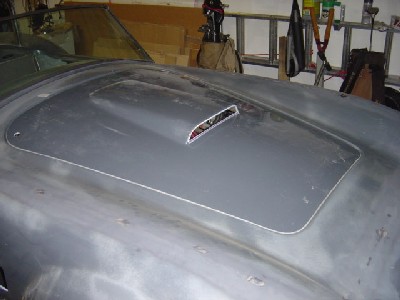 I used a combination of disk sander and orbital sander to take a little off at a time. I used a felt tip marker to mark the hood and this way I could gauge how much I was sanding off.

Hours spent on the build: 218 hours