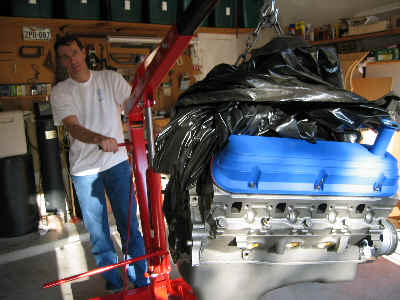 I decided to purchase an engine lift to make life easier.  Sure I could have rented one but I would have had to rent it at least two different times and I found a reasonably priced engine hoist.  Here the engine is coming off the back of the truck. 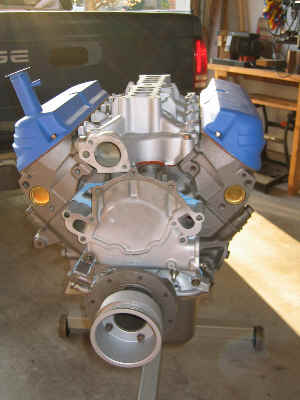 The engine cleaned up really well.  I ended up having it bored out 40 over, new oil pump, pistons, rings, reground and polished camshaft. They gave the heads a value job.  I cleaned each of the hydrolic lifters. Aren’t you impressed?  arh arh arh They also “wire brushed and magnifluxed” the block which is why it looks so new.

I went ahead and bought a new water pump since a local auto parts store was having a grand opening and I got a pretty good price on a new water pump. It is not installed yet… obviously.

Some folks wondered why the blue value covers. Well to be honest, chrome covers were out of my price range and I had a can of  blue engine enamel already.  I will not say “price is no object”.

Stewart shipping called and the kit is in route. I am told they have a lift that will lift the kit and 6 to 10 boxes off the truck. I was told I do not need to have anyone there to help and that they would use a dolly to roll it right into my garage.  The big question is will it all fit in a two car garage??  Anyone know what the Factory Five return policy is?  lol

I did build a body buck based on the template provided in the installation manual.  The plan is to put the body in the back yard and use the whole garage for the frame and boxes.  I will tell you how accurate the template is after put the body on the body buck. 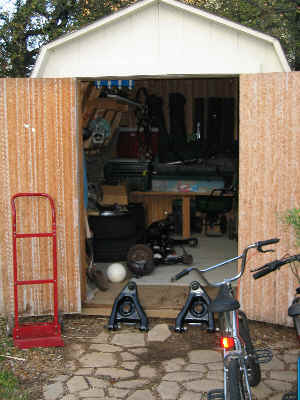 I figure it will be okay to leave the body in the back yard when I can do some of the body work in he great outdoors.  For those wondering if you have enough space I also made use of the shed in the back yard to store parts from the donor.  If you look closely you can see 4 tires, gas tank, pedal box, wiring harnesses, steering column and steering rack as well as some camping stuff.

I had the kit shipped via Stewart shipping and they did a great job. Their enclosed truck has a special hoist for unloading kits.  They happened to have a few completed FFR cars in with my kit.  My kit was all the way up on the front of the truck. 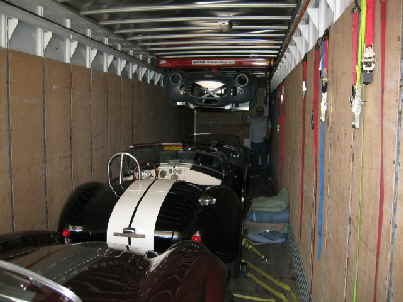 The kits sees daylight. The hoist now is able to lower the frame and body on to that dolly leaning up against the truck. Brice, the driver, told me he often gets offers to purchase that dolly.  The kit was lowered onto that dolly and wheeled into the garage.  It was a one man operation and took less then 30 minutes. 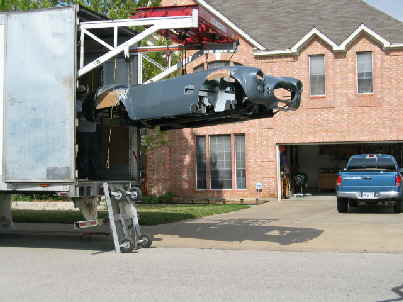 There were 10 additional boxes that were still in the truck at this point.  There were several items back ordered but nothing that was going to prevent me from starting on the kit.  The big question is answered.  The kit fit in the garage as well as the 10 boxes.  No problem and plenty of room to work with. 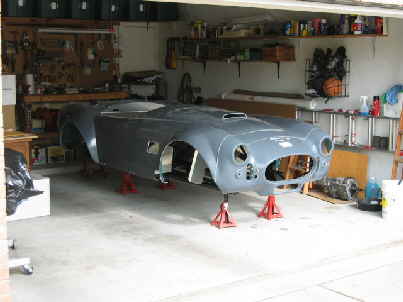 Doors were duck taped closed and inside the body were the aluminum body panels.  The chrome roll bars (for passenger and driver) were back ordered as well as the high back seats. They will be delivered via UPS later.  Brice provided me with the inventory list of each box and back ordered items and was off to his next delivery which was only 17 miles away.

I have officially started to assemble the kit after removing all the aluminum panels that were put in place during shipment.  I carefully label all panels and made marks (with a marker) on where the panels were and which panels overlapped others.
Oh, the body was carried to the back yard and placed on a “body buck”.  I’ll have pictures of that later. 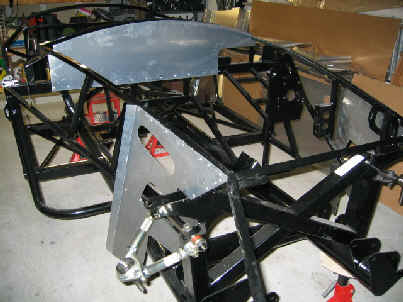 I did have to purchase a riveting tool.  I picked up one with a swivel head for 20 bucks and it is so cool.  I am going to look for things to rivet just to rivet.  I did find out it does not rivet dog  tails to the wall very well.  …. Just kidding.

Here is a close up of the F panel that is one of the first things to rivet.  Also installed was the upper  control arm.  I also realized I will need to invest in a new 1/8 inch drill bit. 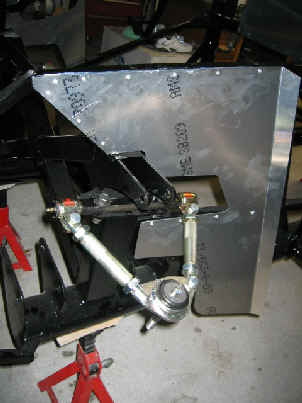 The upper ball joint was screwed in to that upper  control arm but I did not find any torque specs for that.

The ball joints, control arms, IFS assembly included a bag of nuts, bolts and washers.  In the end it was pretty easy to figure out where all  those parts were used but my first reactions was YIKES what do I do with all this stuff.

So far I have no extra parts.  This is good. Note in the top picture you see the dash was also riveted in place.  The section above the driver’s foot box was not yet riveted.  It was not clear from the directions but it sounded like it might be necessary to bend that piece when the wiring gets installed.  Will finish riveting that later.

After working on the car I turned to open a box that I thought was from Factory Five (back order parts).  To my surprise my brother sent me out a set of polished aluminum Cobra valve covers. AWESOME!!  What a pal! 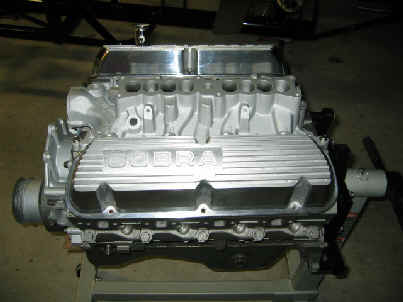 Anyone want to buy a pair of blue stock valve covers.  lol
Several folks have asked about the time spent on the car so I will start a running counter that gives approximately how much time was spent.

Please remember this is a hobby, not a race. Many of you could probably do this faster.  I am just having fun so don’t laugh when you see I take 3 hours to install new valve covers….. lol

Hours spent on the build: 2 hours

Next items to install were the lower control arms, the axle spindle and the coil over-shocks. Not hard to do but the bracket that came with the kit (the piece holding the upper ball joint) was a tight fit on the spindle. It had to be spread just a little to get it to fit on the spindle. 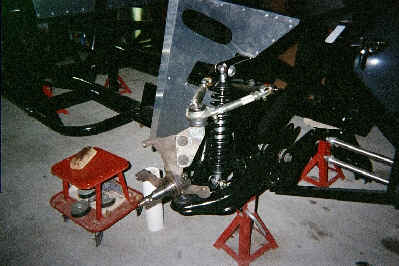 Here you can see the lower control arm, the spindle, upper “A” arm from  the kit and the coil over-shocks.

Hint: when you install the upper ball joint pay attention to the hole for the cotter pin. Rotate the ball joint so you will be able to insert a cotter pin.  It will be obvious what I mean when you look at the parts in person.

The forum had several postings about adjusting the coil over-springs but the instructions did not say anything about that yet.  So for now the springs are just hand tight (I did not yet use the tool that came with the kit). 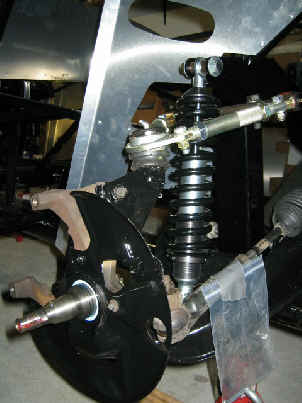 Here is a closer view after installing the brake dust plate.  The baggie is holding some cotter pins for the steering linkage.  I figure this way I am less likely to forget them.

Next was the steering rack.  Per the instructions I placed as many washers as I could (6 to be exact, for spacers) towards the front.

When I installed the steering rack per the instructions I found my front wheels were way out of alignment.  They were toed in way too much.  I need to go to the Cobra forum to ask advice on that item. That explains why the cotter pins were not installed yet…. I figure I will need to do some more adjustments on the tire alignment.

I had a question about the position of the bracket that held the lower end of the coil over-shock. There was not a real good picture in the manual.  I went with what looked right and checked  how it was installed on Darren’s Cobra (a local FFR owner) and I guessed right.  Lucky me… I should have bought a lottery ticket. 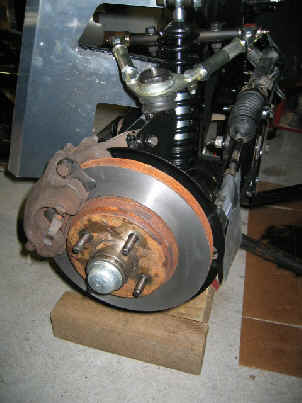 Next I had the original rotors turned at a local brake shop.  Re-packed the inner and outer  bearings. The inner seal was also replaced.
The original calipers from the Donor were put on with the original pads because the original pads looked almost brand new.
I put a coat of paint on those brackets that hold the upper ball joints.

Hours spent on the build: 11 hours