Oh my gosh, I just realize about a year ago was when I started tearing down the donor car.  Happy anniversary!

Here are a few pictures of how I ran my fuel lines. I found it easier to straighten out the 25-foot coil of fuel line and run it under the car first. Then, I started at the gas tank and made my bends as I worked the line along the frame’s 4-inch tube. 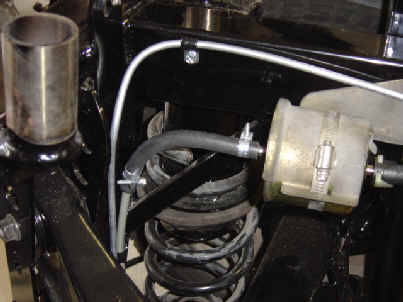 Actually I did the final bending and connection after the fuel lines were run front to back.

I used AutoZone’s free tool program and borrowed a flaring tool to double flare the ends.  Otherwise it was 25 bucks to buy the tool. I am hoping I won’t be doing that much flaring.

For me it was easier to drill and clamp the fuel lines as I worked my way towards the engine compartment. 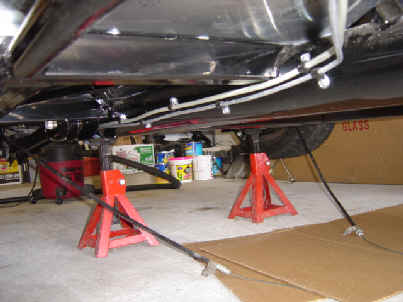 Here you can see how I mounted the lines to the frame’s 4-inch tube.

Here I brought the lines up in front of the passenger foot box.  I left lots of extra tubing so I can make my final cuts once the engine is in place. 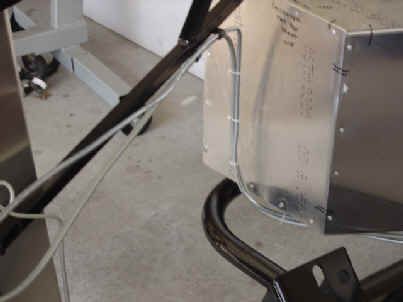 Not quite as neat as the picture in the install manual but I was using a 4 dollar tube bender. These lines were harder to bend then the brake lines. I did not use about 10 of the 25 feet of line that came with the kit.  Maybe they sent enough to run fuel lines twice.  I’ll let you know if that is the case.

I also spent some more time wet sanding the body and then gave it a coat of primer to help show places I missed with my Bondo.  My name is James…. James Bondo!

Hours spent on the build: 50 hours

I have read about the tight space between the gas pedal and the brake pedal and wanted to do something about it before riveting the driver’s foot box. 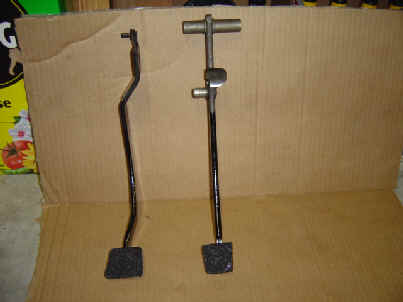 So I trimmed about 1/4 inch off of the brake pedal, used bondo to fill in the dimple on the pedal. Then covered the pedal with anti-skid  stuff that is meant for stairs. I was pleased with how it turned out.  I did the clutch pedal also.  I am going to order that Russ Thompson gas pedal from Breezeautomotive.com.  Hopefully that will give my fat feet room.

The other option is to never use the brake.  lol

I am getting ready to install the engine so I started putting it back together.  I also broke down and bought a leveling sling for 15 bucks on the internet (and 15 bucks shipping!!). I figure it was a cheap tool that will make tilting the engine and transmission easier. 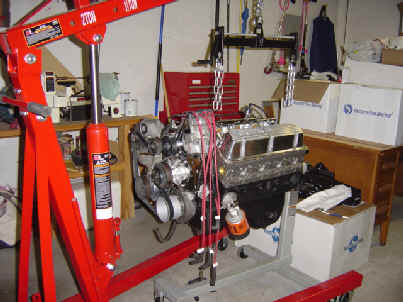 I also decided to go with the 90 degree oil filter adapter seen here on the engine.  I liked this approach opposed to the remote filter method that comes with the kit. I read a forum posting about a failed hose that sprayed hot oil all over the engine. I figure a 50 buck adapter was a small investment and now I won’t worry about blowing a hose with hot oil running through it.

After spending an hour or so cleaning up the donor’s bell housing and clutch I decided to replace the clutch since the engine and transmission was out of the car. Even though the donor ran just fine, the clutch plates showed a fair amount of wear. 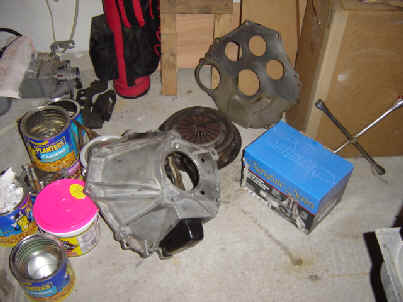 I have never done a clutch job before.  Hey what the heck…. now is the time to learn.

Hours spent on the build: 53 hours